Swimming Against All Odds

Swimming Against All Odds

I can still remember fragmented images from early childhood experience with water; swimming with my floaters placed firmly around my arms, while Mom and Dad lounged next to the pool. Being fascinated and curious about the world around me, on one particular occasion, I took the floaters off to explore further depths. My parents observed the floaters above water, saw me immersed and feared that I must have been drowning.

Without hesitation, my father dove into the pool and “rescued” me. To this day, it’s unclear if I was drowning or harmlessly exploring unchartered terrain– but to the credit of my parents, they put the inflated arm cuffs back on me and dropped me right back into the water. Who could have known that this experience would later prove to be enriching in both my finances and personal growth?

Last year while I was visiting Rio de Janerio, I spent some time crashing on the couch of my dear friend Dan. Dan and a few of our friends were walking on the beach, enjoying the sun, when a cheeky thought emerged in my mind and manifested itself into words. “I bet I could swim to that island over there,” I said, pointing to a piece of land in the distance.

My audacious declaration was promptly met by strong doubt from everyone in the group:

“There’s no way you can swim that far.”

Much like many disagreements amongst degenerate gamblers, this particular disagreement soon turned into a tangible bet, where I was laid 3:1 odds on successfully swimming to the island.

Upon announcing the bet publicly, several professional gamblers reached out to me, wanting more action. I took as much as I could get. After all, I was being laid odds on something I thought I was a favorite to pull off.

Sure…it was concerning that most of the people who bet against me were the type who were almost always on the winning side. I had no formal swimming training, nor had I ever swam more than 500m continuously. Not a soul thought I could pull it off. My own family even tried to talk me out of attempting it. But none of that mattered. I knew myself better than anyone. I’d never give up.

The terms were set. I had to swim to the island 5 kilometers away and had one week to prepare.

My preparation would be a combination of mental and strategic. I hired a friend to research which time and day the tides would be in my favor, and practicing visualization throughout the week was a part of the non-physical strategic outline I would employ.

Visualization is a fascinating technique that actually has a real scientific basis. One of the more interesting studies I came across concerning visualization involved an experiment where a group of basketball players were divided in 3 groups, and then tested on their ability to make free throws. The first group would practice 20 minutes per day; the second would only visualize themselves making free throws, but never practice; the third would neither practice nor visualize.

The results were astounding.

There was significant improvement on the group that only visualized, and they were almost as good as they guys who actually practiced! Taking advantage of this technique, I walked on the beach for 30 minutes a day and watched myself in third person swimming toward the distant island, and imagined myself physically touching the land.

My mind’s eye saw the doubters’ reactions after the victory, and I used these images to serve as additional motivation, rather than create self-doubt. Not only did I visualize the win, I imagined the feeling and energy that success would bring to my body and obsessed over obtaining its physical counterpart.

While walking on the beach a few days into my training, I met an older gentleman wearing a full body swimsuit who looked as though he had made the swim a thousand times before. I approached the lanky swim guru to inquire for some advice, informing him of my declaration, the proposal, the doubt and my belief.

“Do you think I could make it? I asked him wholeheartedly.

He wrapped his arm around my shoulder and told me I could while leading me to the edge of the ocean.

We swam about 100m out while he corrected my form and shared his tips. Then he hit me with a line that stuck with me all week, “Just remember to smile; you’re having fun man!”

The friend whom I hired to research the potential challenges I would face came back to me with some useful information. It was relieving to discover that the water was too warm for sharks and that there hadn’t been a single report of an attack. After extensive analysis, we decided that the optimal swimming time of the week based on tides and weather would be Saturday morning at 11am.
On the day of the swim, I awoke to extreme wind and insane 2.5m waves that were thrashing upon the beach (video link). It was the first time doubt crept in. Technically, I could have still waited to swim on Sunday but according to the tide reports, that was the worst day to go. 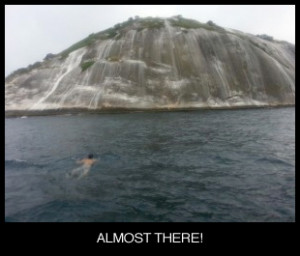 I put on my big boy pants and stuck to my gut instinct that knew no matter what, I could do this. As I geared up to go, my friend Connor, who didn’t want to take the original bet of 3:1 odds, saw the conditions and offered me 7:1. I took the extra action.

Finally, the time had come. The safety boat arrived and I was as ready as I’d ever be. Swimming a few hundred metres out, I immediately recognized that the waves created a unique, unanticipated challenge.

I always thought if I gassed out, I’d be able to lay on my back and wait for my energy to recoup. This fallacy was quickly realized in practice when laying on my back lead to having gallons of saltwater engulf my face and go into my mouth and nose. After many failed attempts of trying to recoup energy this way, I adjusted by employing the doggy paddling technique instead. I made it out about 4km when the tide began to change and the current was literally dragging me back to the beach in which I set off from.

I began to panic.

I was so close yet so incredibly far. Part of me that was becoming consumed with exhaustion wanted to just give in and let the current take me, or at the least wait for the safety boat come and grab me.

Giving up wasn’t an option, though. I could do this. My shoulder was cramping, my knee not fully extending and my body giving in to fatigue…but I was having fun.

It was only at this point that I realized this meant much more to me than merely winning a bet. There was something deeper at play which increased the stakes considerably. How I handled these next few moments would define who I am as a man. Would I be the person who gets so far, only to quit when things got too difficult? Or would I fight through the pain and reap the treasures of my persistence?

I began having vivid visual flashbacks of the kind man I met earlier in the week: “Don’t forget you’re having fun.” As I peeled the corners of my mouth into a smile, my motivation became pure. I repeated those words in my head with every stroke. I dug deep into unknown reservoirs of energy and finally noticed progress in seeing the island grow in size. I was getting close.

Before I knew it, my hand was touching land. I had made it. My body collapsed not long after in a trembling state of exhaustion and dehydration.

But it didn’t matter. I had done it.

I couldn’t have been more humbled and proud at the same time. This victory helped me prove to myself as well as others that belief in yourself makes your visions both possible and attainable. 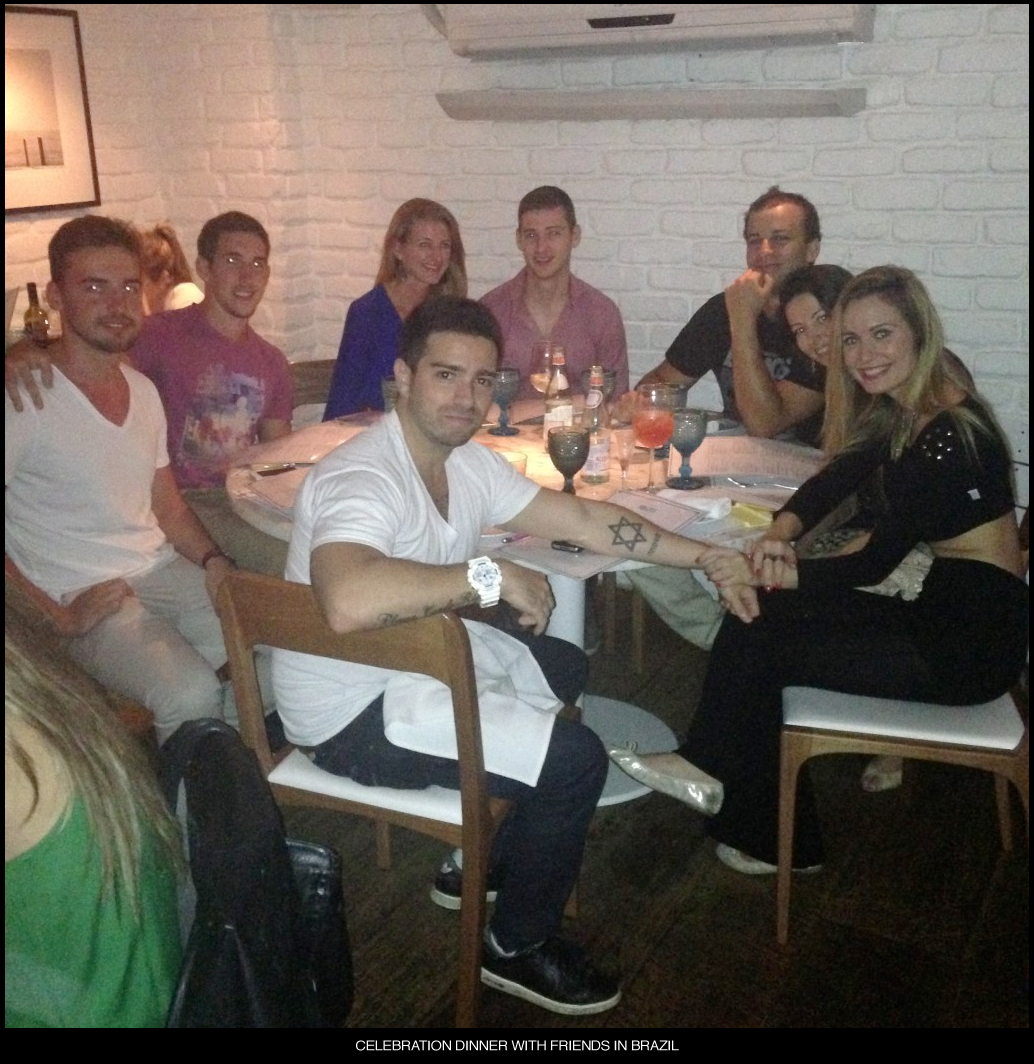 One of my favorite authors, Napoleon Hill, once said “Whatever the mind of man can conceive and believe it can achieve.” And the real question I have to you is: what exactly is it that you want to achieve, and what story do you keep telling yourself that’s holding you back?